Common question asked in almost every class that i deliver is how can we manage our vSphere infrastructure from command line?

So thought of dedicating a page for command line management of vSphere infrastructure.

Will start the discussion with vSphere Management Assistant which allows administrators and developers to run scripts and agents to manage ESXi hosts and vCenter Server systems.

vMA is a virtual machine that includes prepackaged software such as a Linux distribution, the vSphere command‐line interface, and the vSphere SDK for Perl.

As administrator, we can add vCenter Server systems and ESXi hosts as targets and run scripts and programs on these targets.  

As a developer, we can use the APIs provided with the VmaTargetLib library to programmatically connect to vMA targets by using Perl or Java.

When we install vMA, we are licensed to use the virtual machine that includes all vMA components  such as.

To set up vMA, we must have an ESXi host. Because vMA runs a 64‐bit Linux guest operating system, the ESXi host on which it runs must support 64‐bit virtual machines.

By default, vMA uses one virtual processor, and requires 3GB of storage space for the vMA virtual disk. The recommended memory for vMA is 600MB.

We can deploy vMA on the following systems:  vSphere 4.1 and later, vSphere 5.0, vSphere 5.1 and later  vCenter Application 5.0 and later.

Before proceeding further with the configuration of vMA ensure we have the username and password for vCenter, Esxi host and vMA.

To deploy vMA vSphere client can be used by selecting file > Deploy OVF Template or can be directly downloaded from URL.

Post deployment we need to configure network settings (IP,hostname,DNS etc) and also specify the password for vi-admin for vMA during first boot.


1) Login as vi-admin and provide the password we specified during first boot. 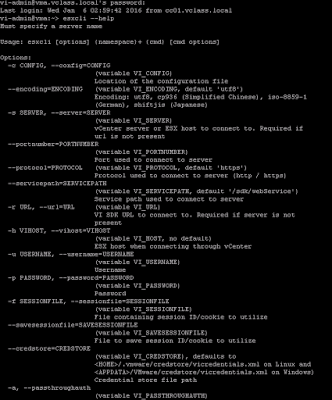 3) One of the first step we need to perform is to add vCenter Server as a server target by running the below command and specifying the password for vCenter Server System.
vifp addserver servername  --authpolicy fpauth --username root

4) Also add ESXi hosts as a server target using the same command by specifying the host name,username and password for your ESXi hosts.

5) Once the server target has been we can run the command vifp listservers command to verify whether it has been added properly or not.

Email ThisBlogThis!Share to TwitterShare to FacebookShare to Pinterest
Labels: Back to Basics, Home Lab