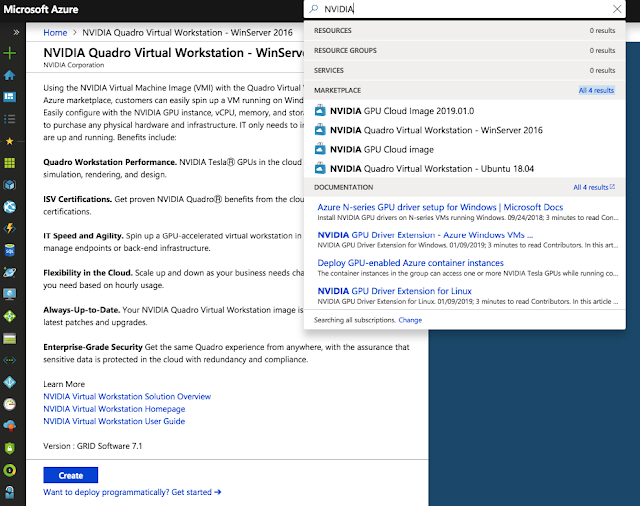 After selecting the NVIDIA Quadro Workstation running on GRID Software 7.1 click create  and specify details including the name of the VM, region you want to provision it in. While selecting the image we need to choose one of the supported Microsoft Azure VM Sizes where each VM is configured with specific number of GPU in pass through mode.

** The NCv3-series focus on high-performance computing workloads (reservoir modelling,DNA Sequencing) powered by NVIDIA’s Tesla V100 GPU and the ND-series is focused on training and inference scenarios for deep learning which uses the NVIDIA Tesla P40 GPU.


After the name, region , image and size is selected specify the administrator account details wherein I used quadro as the username and the password and then configure other options like disks, Networking, Management , Guest Config and Tags's like any other Azure VM. 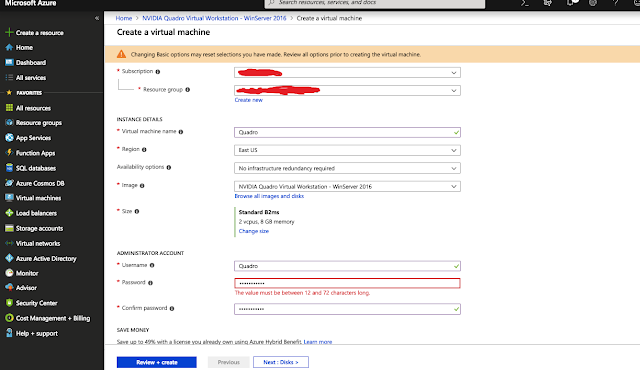 Once we have configured all the required option for our NVIDIA Quadro Virtual Workstation  we can review and spin the VM. And connect to it after downloading the RDP file or directly. Below is the example I picked from NVIDIA wherein they are running with Ansys Discovery live on their cloud-based virtual workstation.

https://blogs.nvidia.com/blog/2019/01/29/ultimate-performance-on-any-device-anywhere-nvidia-quadro-comes-to-the-cloud/
Posted by Kanishk Sethi at 14:27:00